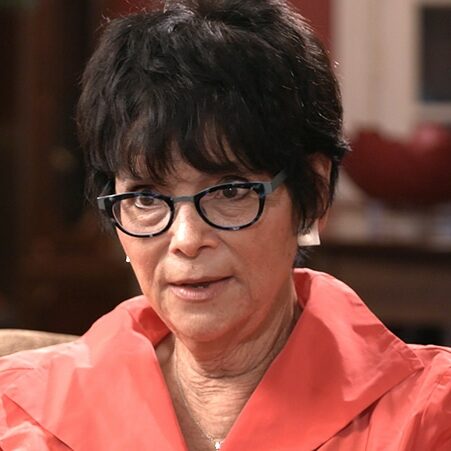 Ruth R. Faden, Ph.D., MPH, is the founder of the Johns Hopkins Berman Institute of Bioethics and was its director from 1995 until 2016. She has served on numerous national advisory panels, including President Clinton’s Advisory Committee on Human Radiation Experiments, which she chaired. More recently, she has spoken out on issues of equity relating to the distribution of vaccines during the Covid pandemic. In SEARCHING part 2, she argues that how beings originate—whether a robot made of silicon such as Bina48 or a non-human animal—is less important than whether they can feel pain and suffering, in which case we have a moral obligation to them. Dr. Faden’s comments offer thought-provoking perspectives on many questions not yet commonly asked.

Ruth R. Faden, PhD, MPH, is the founder of the Johns Hopkins Berman Institute of Bioethics and was its director from 1995 until 2016. She was the inaugural Andreas C. Dracopoulos Director (2014-2016) and currently is, and has been since 1995, the inaugural Philip Franklin Wagley Professor of Biomedical Ethics. Dr. Faden’s current research focuses on structural justice theory and national and global challenges in food and agriculture, learning about health care systems, women’s health, the rights and interests of pregnant women, health systems design and priority setting, and advances in science and technology.

In the twenty years during which Dr. Faden led the Berman Institute, she transformed an informal interest group of faculty across Johns Hopkins into one of the world’s premier bioethics programs with over 35 faculty, 30 staff, and over 100 alumni. Dr. Faden also secured a significant endowment for the Berman Institute, including six endowed professorships and an endowed directorship.

Dr. Faden is a leading scholar in the field of bioethics. She is the author and editor of numerous books and many articles on biomedical ethics and public policy, including most significantly, “Social Justice: The Moral Foundations of Public Health and Health Policy” (with Madison Powers), “A History and Theory of Informed Consent” (with Tom L. Beauchamp), and “Structural Injustice: Power, Advantage, and Human Rights” (with Madison Powers; Oxford University Press).

Dr. Faden is an elected member of the National Academy of Medicine, a Fellow of the Hastings Center, and the American Psychological Association. She has served on numerous national advisory committees and commissions, including President Clinton’s Advisory Committee on Human Radiation Experiments, which she chaired. Dr. Faden co-launched the Global Food Ethics and Policy Program and sponsors the “7 by 5 Agenda for Ethics and Global Food Security.” She is also a co-founder of the Hinxton Group, a global community committed to advancing ethical and policy challenges in stem cell science, and the Second Wave initiative, an effort to ensure that the health interests of pregnant women are fairly represented in biomedical research and drug and device policies.

In 2011, Dr. Faden received the Lifetime Achievement Awards from the American Society for Bioethics and Humanities (ASBH) and Public Responsibility in Medicine and Research (PRIMR). She is a Member, Delta Omega Fellow, American Psychological Association Fellow, The Hastings Center Fellows Council (1998-2002) Member, Institute of Medicine and was honored with the Golden Apple Award, Johns Hopkins School of Hygiene & Public Health, 1980-81.

In the twenty years during which Dr. Faden led the Berman Institute, she transformed what was an informal interest group of faculty across Johns Hopkins into a one of the world’s premier bioethics programs with over 35 faculty, 30 staff and over 100 alumni.
READ MORE