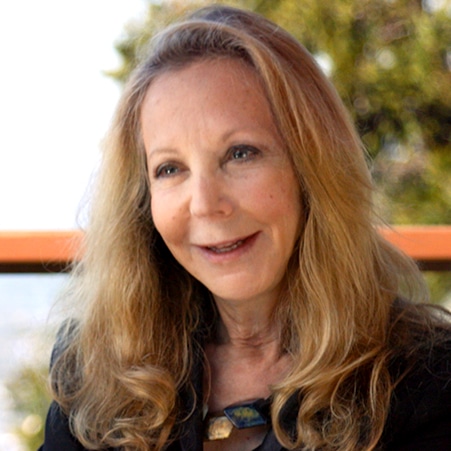 Rebecca Newberger Goldstein grew up in White Plains, New York, and graduated summa cum laude from Barnard College. After earning her Ph.D. in Philosophy at Princeton University, she returned to Barnard to teach a wide range of courses in philosophy. Like Alan, she’s a novelist, using fiction to explore “36 Arguments for the Existence of God” and imagining the Greek philosopher Plato coming back to life and engaging in a book tour, including lecturing at the Googleplex. Although also, like Alan, a materialist, she thinks some aspects of humanity, like falling in love, will never be fully captured by computers or explained by science. She’s not dismayed by the future heat-death of the Universe, but instead relishes the experience of being alive, now, and living in the moment.

Rebecca Newberger Goldstein grew up in White Plains, New York, and graduated summa cum laude from Barnard College, receiving the Montague Prize for Excellence in Philosophy. She immediately went on to graduate work at Princeton University, receiving her Ph.D. in philosophy.  While in graduate school she was awarded a National Science Foundation Fellowship and a Whiting Foundation Fellowship. After earning her Ph.D. she returned to her alma mater, where she taught courses in philosophy of science and philosophy of mind and philosophy of mathematics. Eventually, Spinoza’s magnum opus, The Ethics, became her favorite text to teach, expanding into a semester-length course.

It was some time during her tenure at Barnard that, again to her own surprise, she used a summer vacation to write her first novel, The Mind-Body Problem, which was published by Random House and went on to become a critical and popular success. More novels followed: The Late-Summer Passion of a Woman of Mind; The Dark Sister, which received the Whiting Writer’s Award; Mazel, which received the 1995 National Jewish Book Award and the 1995 Edward Lewis Wallant Award; and Properties of Light: A Novel of Love, Betrayal, and Quantum Physics. Her book of short stories, Strange Attractors, received a National Jewish Book Honor Award.

Goldstein had become increasingly interested not only in the arguments that philosophers construct, but also in the person behind the arguments, and, in particular, the individually variable core intuitions brought to bear in philosophical thinking. Approached to contribute a book to Norton’s series on great scientific discoveries, she decided to write about the Incompleteness Theorems. Her 2005 book Incompleteness: The Proof and Paradox of Kurt Gödel, was featured in articles in The New Yorker and The New York Times, received numerous favorable reviews, and was named one of the best books of the year by Discover magazine, the Chicago Tribune, and the New York Sun. Her next book, part of a series on great Jewish thinkers and themes, was Betraying Spinoza: The Renegade Jew who Gave Us Modernity, published in May 2006; it won the 2006 Koret International Jewish Book Award in Jewish Thought.

Her latest novel, Thirty-Six Arguments for the Existence of God: A Work of Fiction, was published by Pantheon Books in 2010 in the U.S. and by Atlantic Grove in the U.K. that same year.  It was named the best fiction book of the year by The Christian Science Monitor and among the top eleven of that year by The Washington Post.

Her latest book is Plato at The Googleplex: Why Philosophy Won’t Go Away. It was published in 2014 by Pantheon in the U.S. and by Atlantic Grove in the U.K. The book alternates between expository chapters, which attempt to place Plato in the context of his extraordinary culture, and modern-day dialogues, which feature Plato himself engaging with the issues of the 21st century. So, for example, he visits the Googleplex, the headquarters of Google, in Mountain View CA and discusses with both his media escort and a software engineer whether ethics can be crowdsourced.  He also debates a tiger mother on how to raise a child, goes on Fox News to speak about the importance of reason, and has his brain scanned, engaging two neuroscientists on the question of whether free will and moral agency are compatible with the findings of neuroscience.  The reviews were overwhelmingly positive and she was the subject of feature articles in, among others, The Washington Post, The Guardian, The Times Literary Supplement, The Times Higher Education Supplement, Prospect, and The Atlantic, with, once again, The Washington Post citing it as one of the best books of the year.

In 1996 Goldstein became a MacArthur Fellow, receiving the prize which is popularly known as the “Genius Award.” In 2005 she was elected to The American Academy of Arts and Sciences.  In 2006 she received a Guggenheim Fellowship and a Radcliffe Fellowship. In 2008, she was designated a Humanist Laureate by the International Academy of Humanism, and was awarded an Honorary Doctorate by Emerson College, where she gave the commencement address. Goldstein has been designated Humanist of the Year 2011 by the American Humanist Association, and Freethought Heroine 2011 by the Freedom from Religion Foundation. In that year she also delivered the Tanner Lectures on Human Values at Yale University, entitled “The Ancient Quarrel: Philosophy and Literature,” which was published by University of Utah Press.

Aside from Barnard, Goldstein has taught in the Columbia MFA writing program and in the department of philosophy at Rutgers, has been a visiting scholar at Brandeis University, and taught for five years as a Visiting Professor in the Department of Philosophy at Trinity College in Hartford, Connecticut. She has also been a Visiting Professor at New York University.  She serves on the World Economic Forum’s Council on Values.

In September of 2015 she was awarded the National Humanities Medal by President Obama in a ceremony at the White House. The citation reads “for bringing philosophy into conversation with culture. In scholarship, Dr. Goldstein has elucidated the ideas of Spinoza and Gödel, while in fiction, she deploys wit and drama to help us understand the great human conflict between thought and feeling.”

Among Rebecca's many accolades, in 2015 she was awarded the National Humanities Medal by President Obama in a ceremony at the White House. 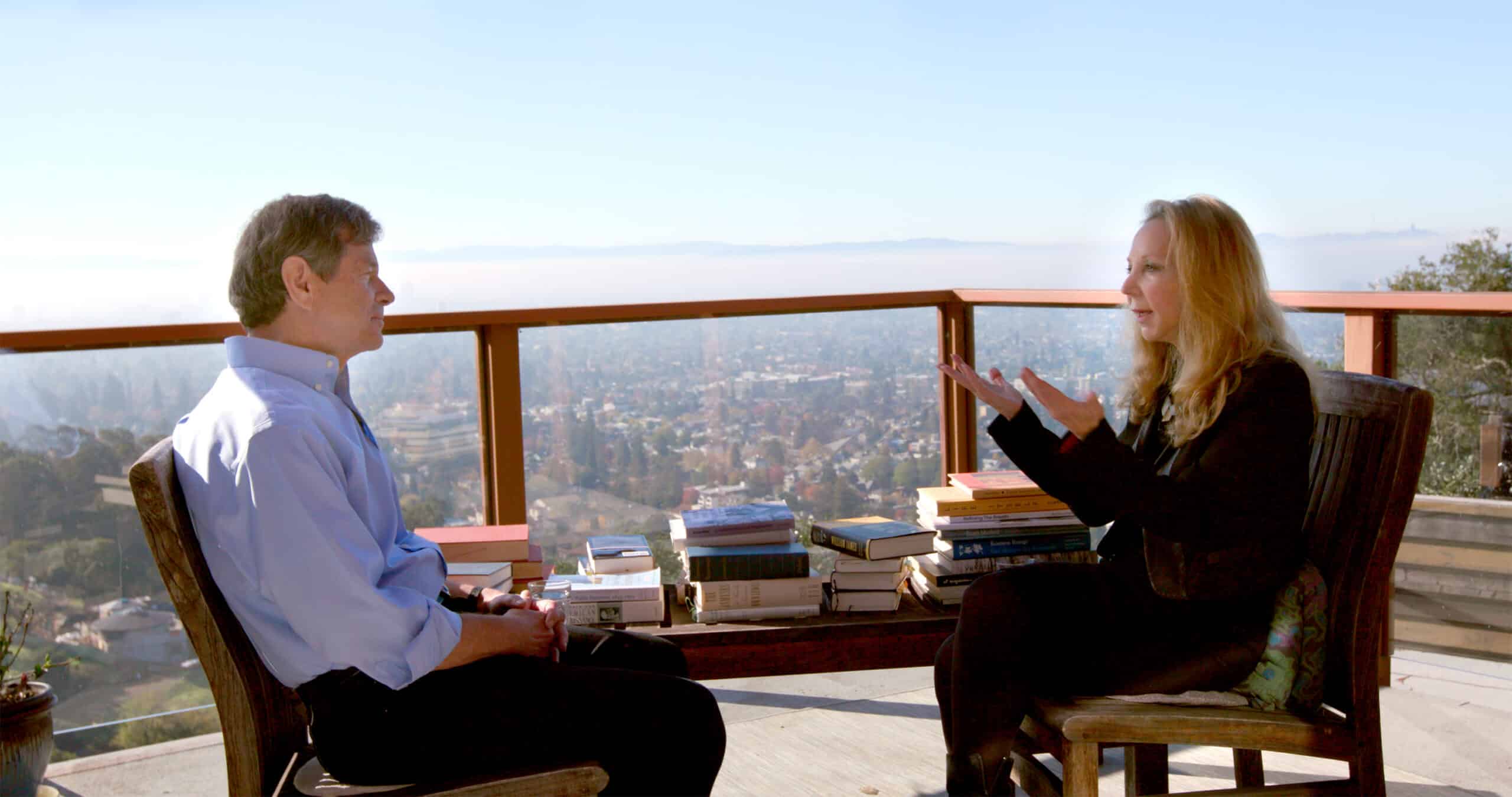 Rebecca expresses her wonder at the fact that humans even exist at all, and suggests that we should appreciate every moment.
Goldstein had become increasingly interested not only in the arguments that philosophers construct, but also in the person behind the arguments, and, in particular, the individually variable core intuitions brought to bear in philosophical thinking.
READ MORE