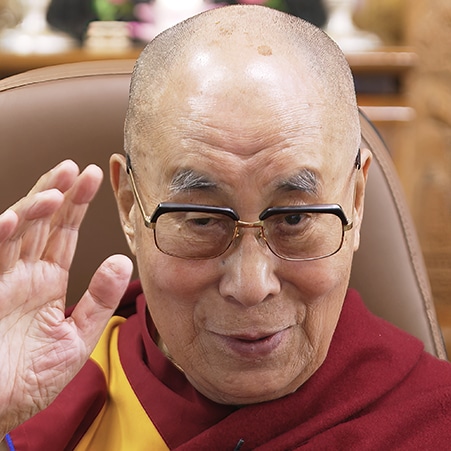 His Holiness the Dalai Lama

His Holiness the 14th Dalai Lama, Tenzin Gyatso, is one of the few religious leaders with a deep interest in science. As described in Heinrich Harrer’s “Seven Years in Tibet” and Brad Pitt’s film of the same name, young Tenzin was fascinated with radios and telescopes, even as he was intensively studying the teachings of Buddhism. Today, he encourages young monks to explore neuroscience, urges monasteries to include new findings in curricula, and for Western scientists to research what happens during meditation. Arranging Alan’s conversation with His Holiness was challenging, as Covid protocols required a Zoom meeting with a 9.5-hour time differential: filming would start at 11:30 pm EST, which is 9 am in India. Nevertheless, His Holiness appears in Parts 1 and 2, and we sincerely appreciate his Office's cooperation.

Read More About His Holiness the Dalai Lama
x

His Holiness the Dalai Lama

His Holiness the 14th Dalai Lama, Tenzin Gyatso, describes himself as a simple Buddhist monk. He is the spiritual leader of Tibet. He was born on 6 July 1935, to a farming family, in a small hamlet in Taktser, Amdo, northeastern Tibet. At the age of two, the child, then named Lhamo Dhondup, was recognized as the reincarnation of the previous 13th Dalai Lama, Thubten Gyatso. The Dalai Lamas are believed to be manifestations of Avalokiteshvara or Chenrezig, the Bodhisattva of Compassion and the patron saint of Tibet. Bodhisattvas are realized beings inspired by a wish to attain Buddhahood for the benefit of all sentient beings. Bodhisattvas have vowed to be reborn in the world to help humanity.

His Holiness began his monastic education at the age of six. The curriculum, derived from the Nalanda tradition, consisted of five major and five minor subjects. The primary subjects included logic, fine arts, Sanskrit grammar, and medicine, but the most significant emphasis was given to Buddhist philosophy. At 23, His Holiness sat for his final examination in Lhasa’s Jokhang Temple during the annual Great Prayer Festival in 1959. He passed with honors and was awarded the Geshe Lharampa degree, equivalent to the highest doctorate in Buddhist philosophy.

In 1950, after China invaded Tibet, His Holiness was called upon to assume full political power. In 1954, he went to Beijing and met with Mao Zedong and other Chinese leaders, including Deng Xiaoping and Chou Enlai. Finally, in 1959, following the brutal suppression of the Tibetan national uprising in Lhasa by Chinese troops, His Holiness was forced into exile. Since then, he has been living in Dharamshala, northern India. In exile, the Central Tibetan Administration led by His Holiness appealed to the United Nations to consider the question of Tibet. The General Assembly adopted three resolutions on Tibet in 1959, 1961, and 1965.

His Holiness the Dalai Lama is a man of peace. In 1989 he was awarded the Nobel Peace Prize for his non-violent struggle for the liberation of Tibet. He has consistently advocated policies of non-violence, even in the face of extreme aggression. He also became the first Nobel Laureate recognized for his concern for global environmental problems. His Holiness has traveled to more than 67 countries spanning six continents. He has received over 150 awards, honorary doctorates, prizes, etc., in recognition of his message of peace, non-violence, inter-religious understanding, universal responsibility, and compassion.  He has also authored or co-authored more than 110 books. His Holiness has held discussions with heads of different religions and participated in many events promoting inter-religious harmony and understanding.

Since the mid-1980s, His Holiness has engaged in a dialogue with modern scientists, mainly in the fields of psychology, neurobiology, quantum physics, and cosmology. These conversations have led to a historic collaboration between Buddhist monks and world-renowned scientists to help individuals achieve peace of mind. It has also resulted in the addition of modern science to the traditional curriculum of Tibetan monastic institutions re-established in exile. 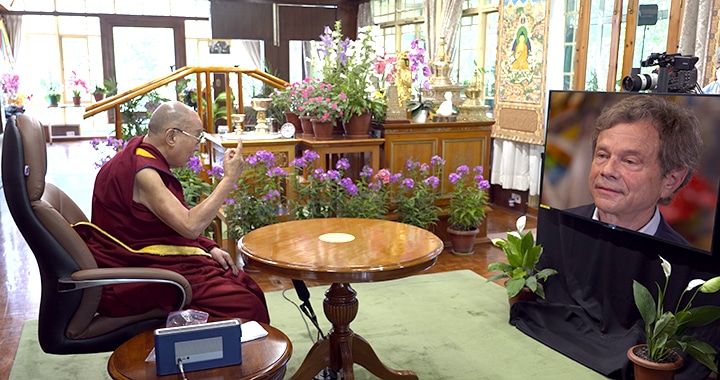 The Dalai Lama shares his views about the value of scientific research and technological advancement.
Since the mid-1980s, His Holiness has engaged in a dialogueue with modern scientists, leading to the inclusion of modern science in traditional Tibetan monastic curriculum.
READ MORE