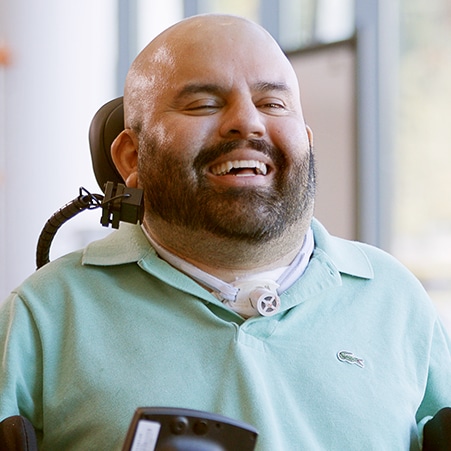 Erik Sorto—41 years old in 2021 and a C3 quadriplegic—grew up in Boyle Heights, Los Angeles, and is a former gang member who wrote the remarkable book “Payback: The Cost of Being a Gangster.” In his conversation with Alan he notes, “My past is very dark, you know? And I wrote “Payback” so that children wouldn’t follow my footsteps.” His involvement in the experimental research project that implanted electrodes in his brain was another way of giving back, helping to advance procedures that one day might restore mobility to those paralyzed by injury.

Here is Erik’s Introduction to “Payback: The Cost of Being a Gangster”

THIS BOOK IS A PLEA FOR FORGIVENESS.
This book is built on pain.
Creating it brought me great pain, because it meant reliving and describing regrettable events during which I caused others great pain.
Remorse of conscience is a constant in my life now. I ask forgiveness from those I’ve hurt, even though I do not blame them if they can’t grant it.
I can only hope that there is forgiveness for those like me who commit wrongs but change, and try to help others—especially the vulnerable young—avoid the same mistakes.
-Erik Sorto, Los Angeles, May 2008

Erik grew up on the violent streets of East LA. Despite the efforts of a loving mother and father, he did not escape the gang violence that surrounded him. He dealt drugs, and collected guns, shooting at others and being shot at. One day, at age 21, driving home from work as a trainee phone company technician, he was ambushed in what may have been a revenge attack, shot in the neck, and paralyzed. A friend and fellow gang member was killed riding along with him. As Erik has told reporters, he spent several years depressed and recovering slowly from his almost fatal injuries, supported by his mother and principal caregiver, and others. Erik said, “I lost my body but regained my mind because I didn’t have the gang mentality anymore. I sought out higher education.” Following a friend’s suggestion, he attended Los Angeles Valley College and eventually earned a bachelor’s in criminal justice from California State University, Northridge. Collaborating with one of his teachers, Professor William Wallis, he wrote the raw and vivid memoir, “Payback: The Cost of Being a Gangster.” Erik’s description of the details of how each day begins was so compelling that, with his permission and that of his mother, Maria, SEARCHING filmed him waking up, getting dressed, and being moved via a Hoyer lift into his mechanized wheelchair for the memorable sequence that introduces Erik in Part 3, “Homo Techno.”

Watching TV, Erik heard about an innovative research project headed by Dr. Richard Andersen, a professor of Neuroscience at Caltech, and Dr. Charles Y. Liu, a professor of neurological surgery, neurology, and biomedical engineering at USC. Andersen believed placing electrodes in a section of the brain called the “PPC” (Post Parietal Cortex) might allow more intuitive movement instead of implanting sensors in the Motor Cortex. It took five hours of surgery, led by Dr. Liu, in April 2013 to implant two plugs in Erik’s brain. After months of recovery and training, Erik could finally control a robotic arm, raise a bottle of Modelo to his lips, and sip it for himself. For five and a half years, four days a week, Erik continued working as a full partner and research collaborator, as Andersen and others at the Rancho Los Amigos National Rehabilitation Center explored the implications of this approach. The research goal is to help paralyzed people regain some degree of independence: the project was partly funded by the National Institutes of Health and the Department of Defense. Erik’s involvement in the experimental research project that implanted electrodes in his brain, his only remaining fully-functioning organ, was another way of giving back, helping to advance procedures that one day might restore mobility to those paralyzed in accidents or wartime injuries.

Dr. Mindy Aisen is a neurologist and chief medical officer at Rancho Los Amigos. She’s worked with Erik for many years and says his commitment to the project has been crucial to its progress. Erik notes he’s very proud that his son, Justin, is an LAPD police officer and that his daughter, Tiffany, is working towards a career in treating spinal cord injuries. Despite a challenging life, he’s encouraged by his belief that his injury and its lessons helped his kids break what might have otherwise been a cycle of violence. As he writes in “Payback,” “Perhaps I should be dead now, like my father, my homies, and many of my friends. But it wasn’t meant to be. I’m still here, and my mother is still here. Please don’t follow in my footsteps, dear reader, because my footsteps have disappeared. Let me explain.” As he does in his book and his revealing conversation in SEARCHING.

SEARCHING feels honored to have been invited into Erik’s home and the research project, and thanks Erik, Maria Sorto, Dr. Charles Liu, Dr. Richard Andersen, Rochessa Washington, and others at Rancho Los Amigos.

Sources:
“PAYBACK: The Cost of Being a Gangster” by Erik Sorto and William Wallis
The Downey Patriot, Daily Democrat, The Daily News 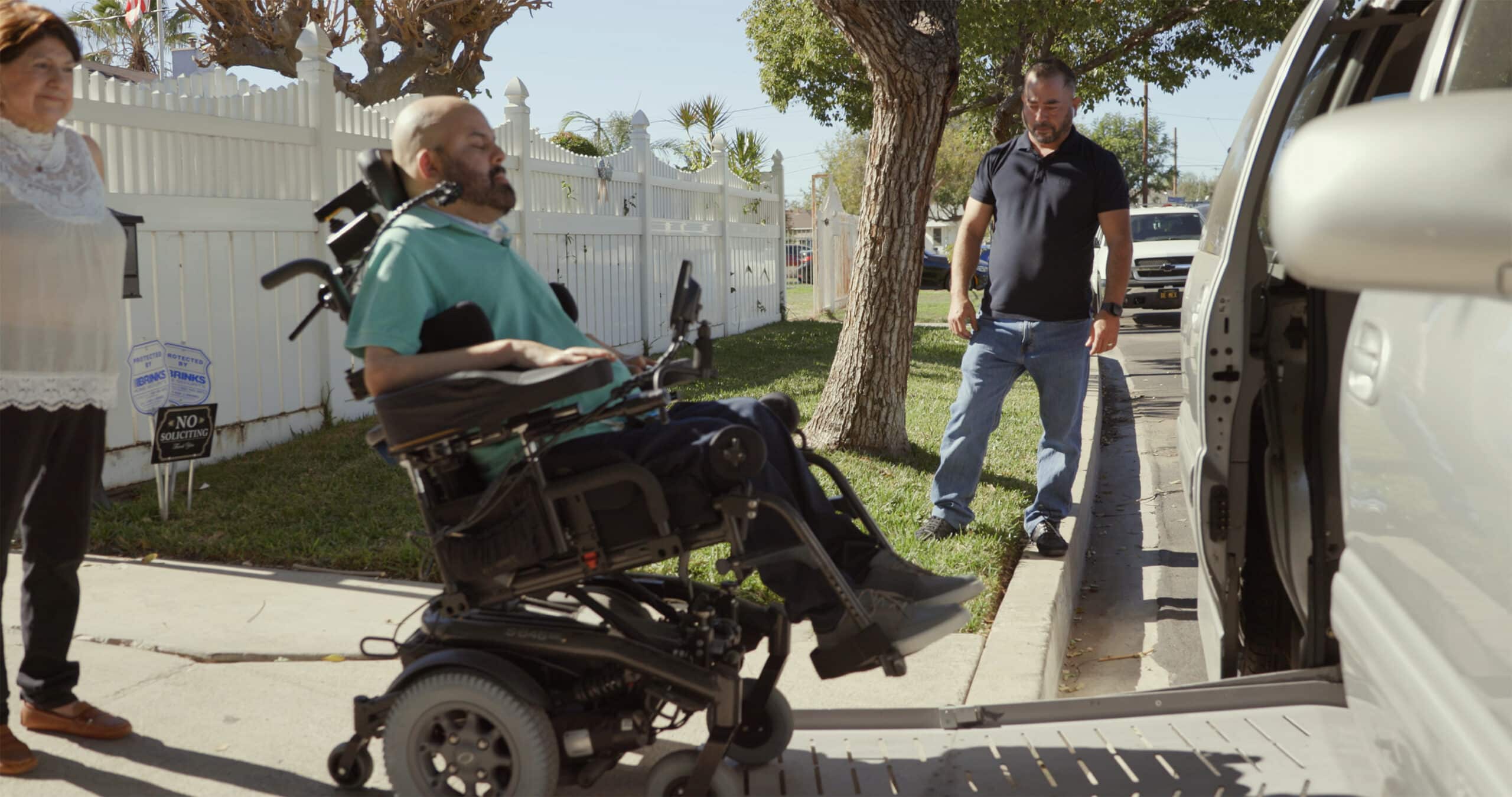 Erik begins his day with a trip to Rancho Los Amigos National Rehabilitation Center.
“I lost my body but regained my mind because I didn’t have the gang mentality anymore. I sought out higher education.” 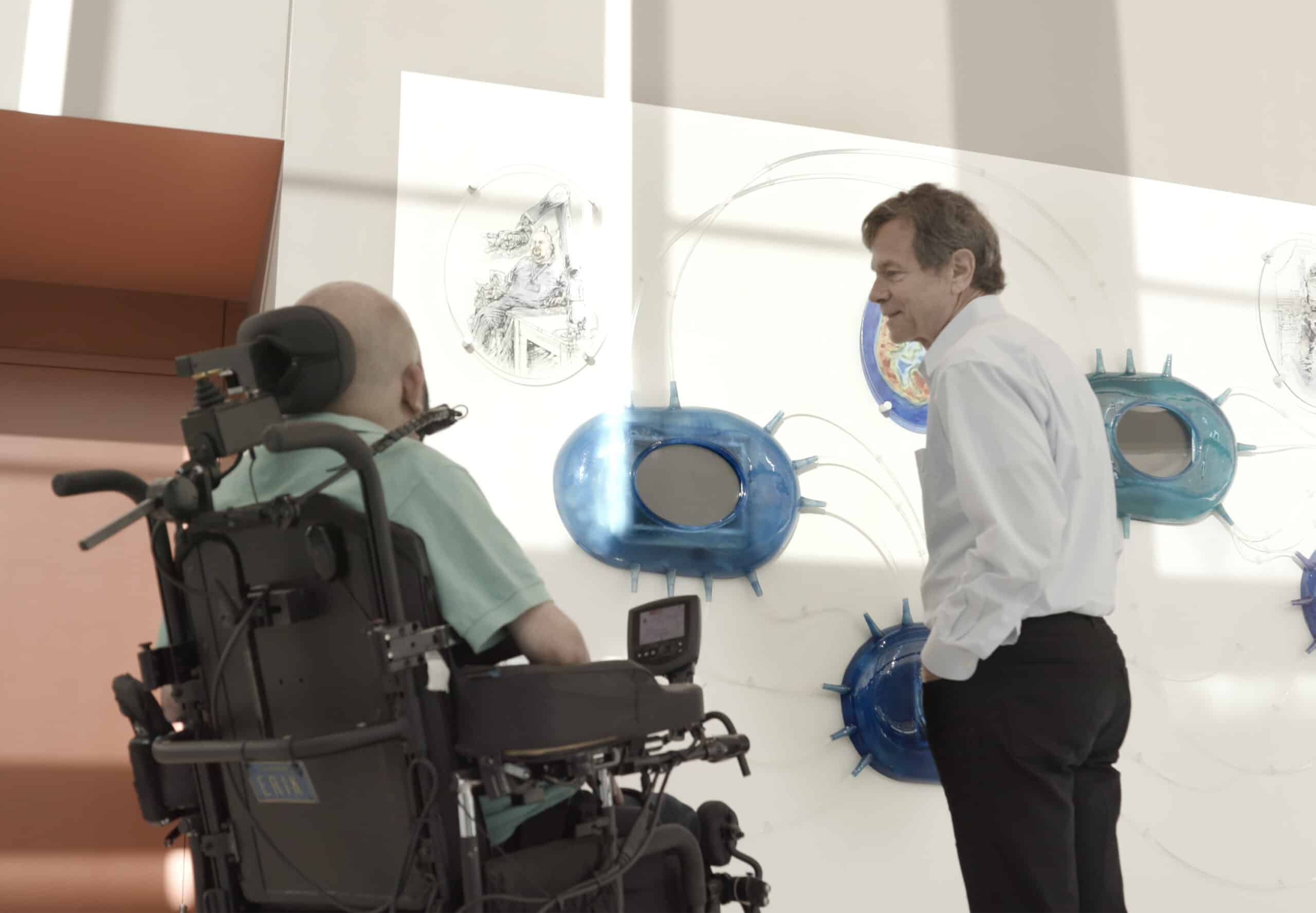 Erik and Alan stop to view an illustration of Erik on the wall at Rancho Los Amigos. 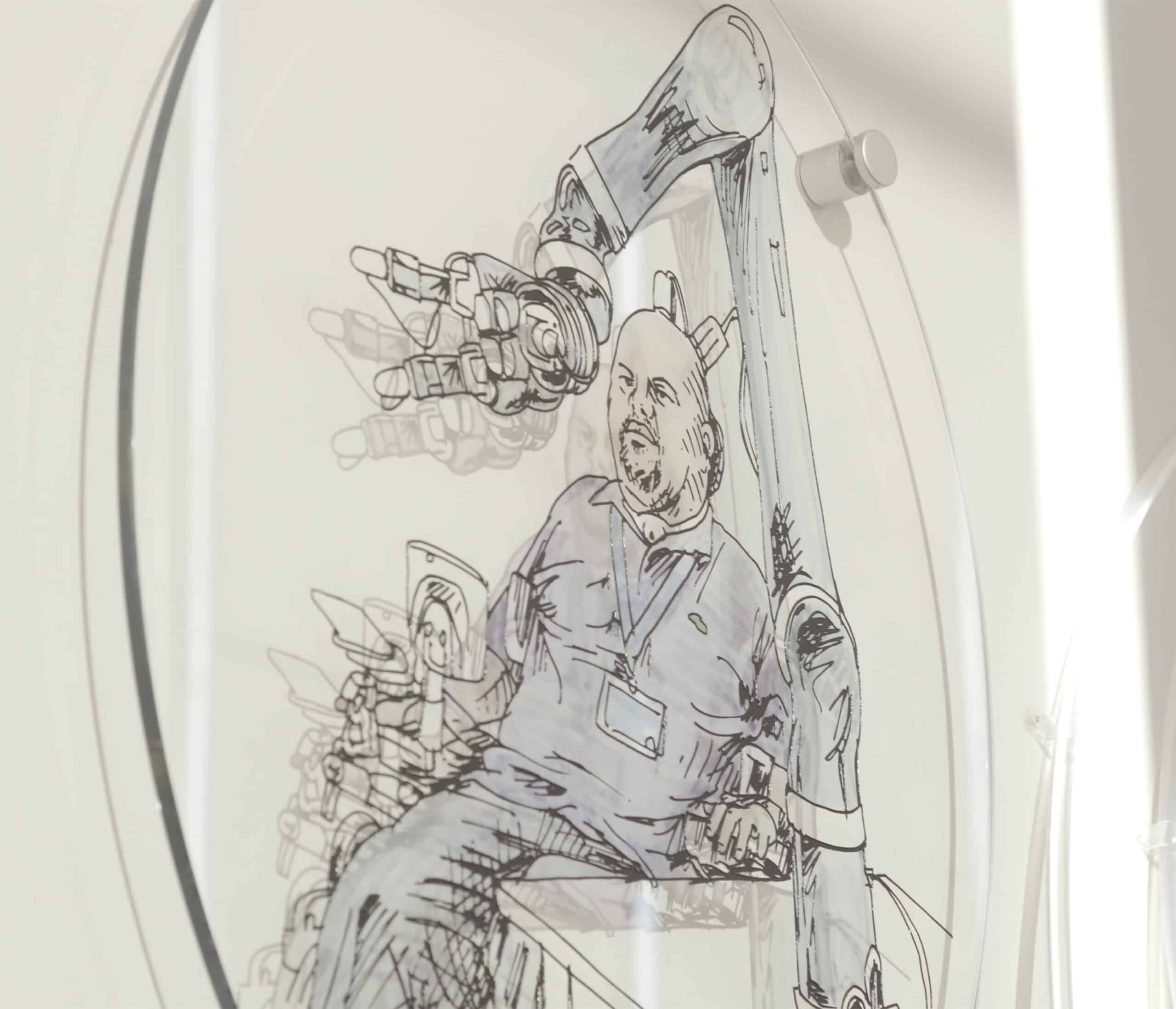 It took five hours of surgery, led by Dr. Liu, in April 2013 to implant two plugs in Erik’s brain. 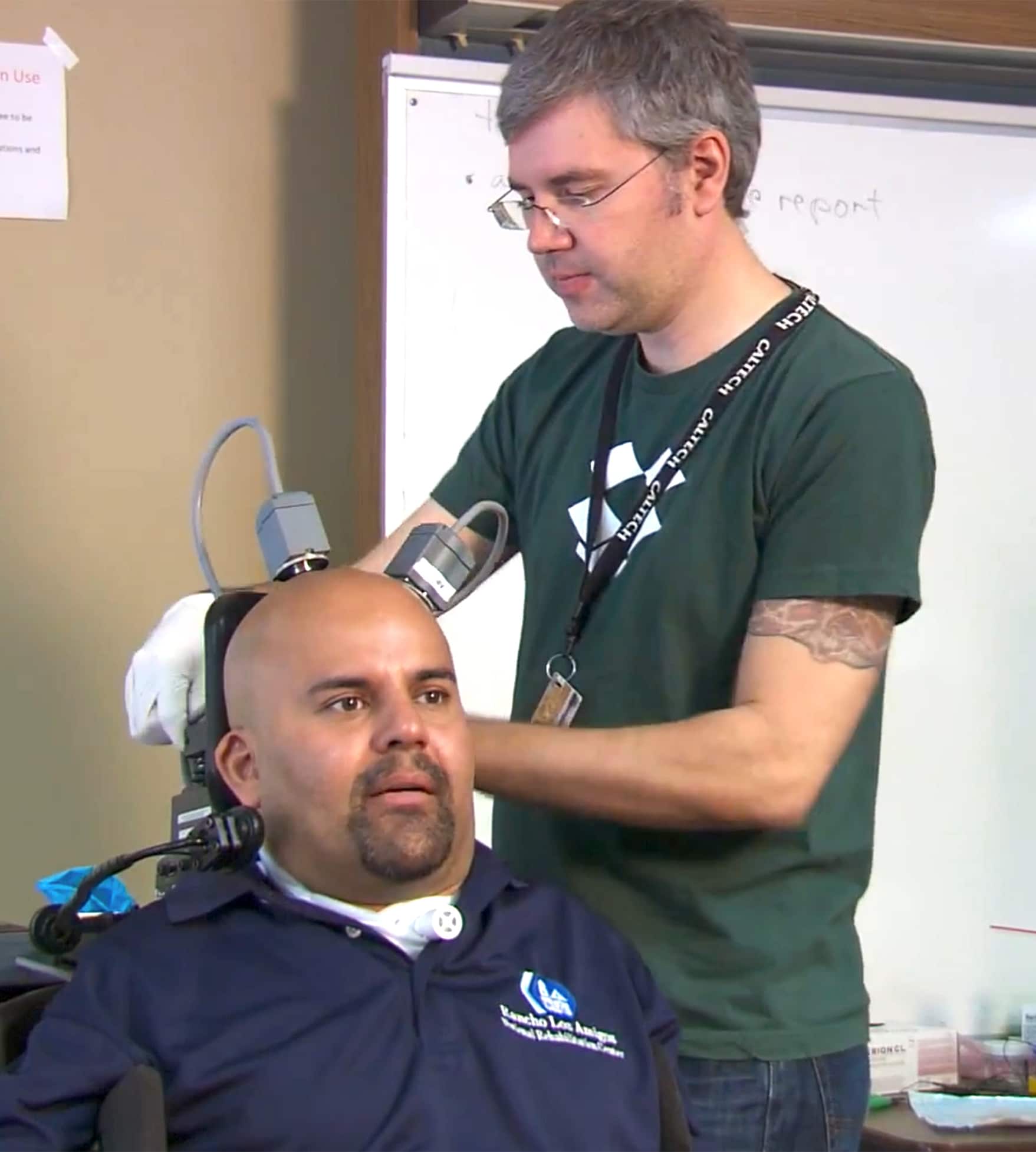 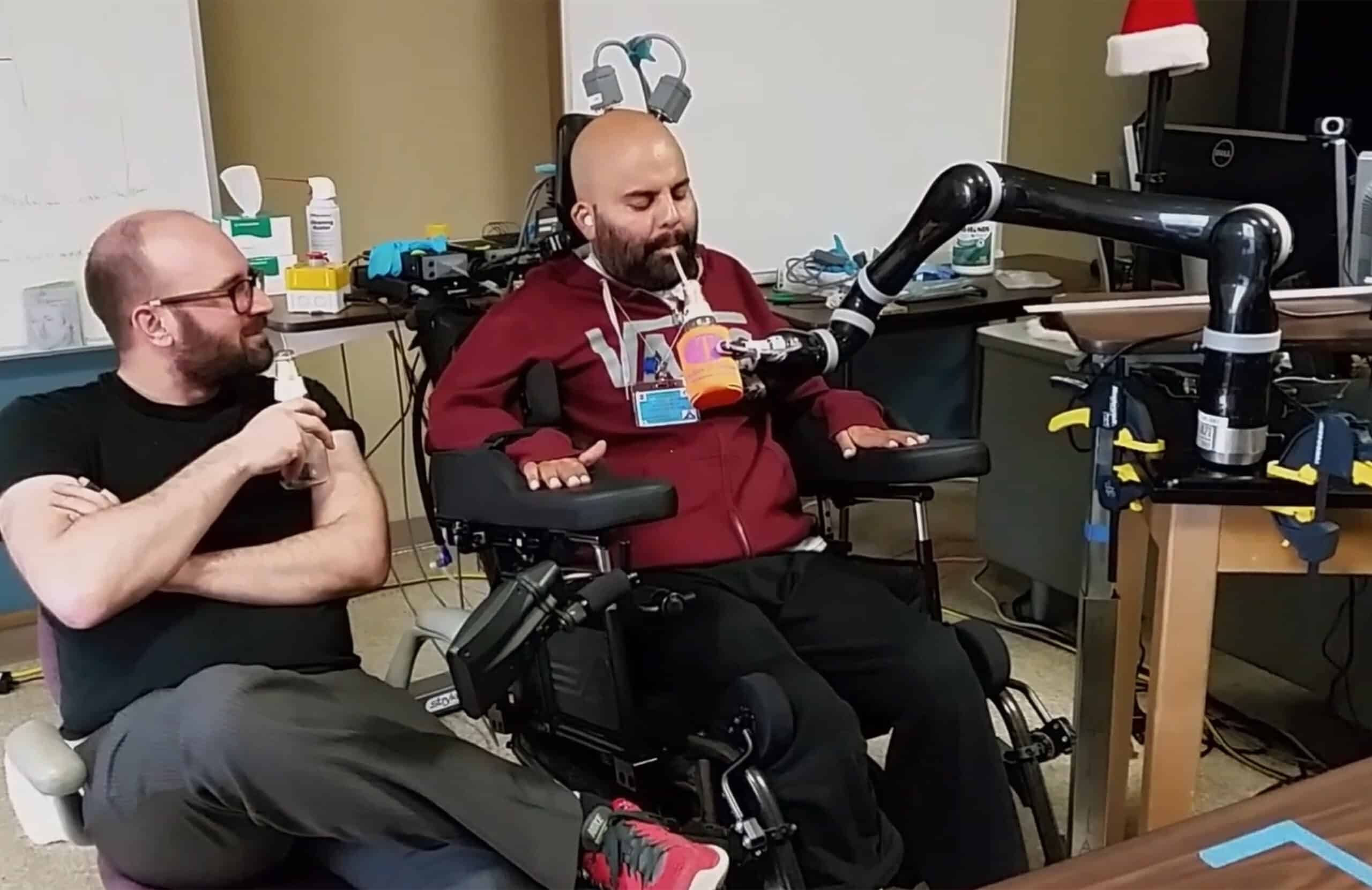 A robotic arm delivers Erik his drink. Erik is able to control the arm with his mind, a feat made possible as a result of an innovative research project headed by Dr. Richard Andersen at Caltech and Dr. Charles Y. Lio at USC..
READ MORE

Erik Sorto: Paying Back and Moving Ahead

Alan Lightman and the entire film crew were profoundly moved, and inspired, by spending time with Erik Sorto, his mother Maria, and the pioneering neurosurgeon, Dr. Charles Liu. In SEARCHING part 3, we focused more on Erik’s personification of what we humans might become as we evolve into “Homo Techno.” This video shares more of Erik’s personal story, and his motivation in volunteering - and risking - his brain to help advance medical research.