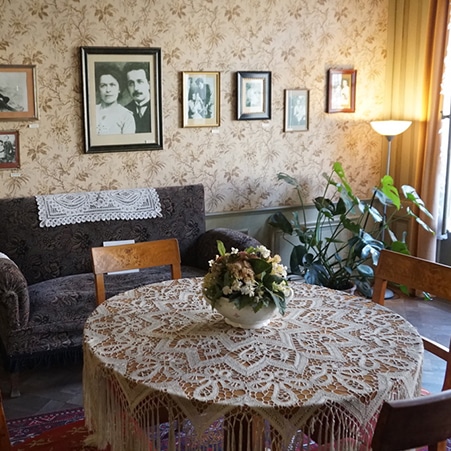 Some homes, even when turned into museums, retain an almost hypnotic power, as if those who once lived there still have a presence. Such is the little apartment on the second floor of Kramgasse No. 49 in Bern, Switzerland, which Albert Einstein rented from 1903 to 1905. It has been restored in the style of that period to reflect Einstein’s crucial years in Bern, although the photographs of Albert and his first wife, Mileva, are recent additions. This was actually Alan Lightman’s first time in the city, despite having written the international best-seller, “Einstein’s Dreams,” which was set here and imagined what young Albert might have been thinking as he developed his Special Theory of Relativity. You can read Alan’s Ruminations about visiting the Einstein Haus below.

1905 can be described as Einstein’s “Annus Mirabilis,” with mirabilis meaning “amazing, wondrous, remarkable” in Latin. From March to September, Einstein surprised the international physics community with five papers on three topics of physics. In that relatively short time, Einstein shook up the then-current fundamental understanding of physics and opened up far-reaching scientific perspectives. In the first of these papers, addressing “Energetic Properties of Light” (also called the photoelectric effect), he argued that there must be a fundamental difference between the description of the propagation of light and its interaction with matter. In the second publication, Einstein attempted to determine the size of molecules or atoms by analyzing diffusion phenomena in dilute solutions and their relation to internal friction. With the third publication, Einstein succeeded in offering an understanding of the long and well-known but yet unexplained Brownian motion, i.e., the thermally induced motion of suspended particles in liquids at rest. But most attention was paid to the fourth paper on “Electrodynamics of moving bodies,” which he later, after the advent of the General Theory of Relativity in 1915, renamed the “Special Theory of Relativity.” The insight that a state of absolute rest cannot be verified by experiment led Einstein to formulate the so-called “principle of relativity,” which states that the laws of physics are the same for all observers moving at constant velocity relative to each other. With the additional assumption that the speed of light in a vacuum is fixed, i.e., the measured speed of light is the same for all observers moving at constant velocity relative to each other (an assumption closely related to the principle of relativity), Einstein realized that the flow of time could not be absolute, the same for all observers and clocks. Clocks moving relative to each other actually tick at different rates, but the discrepancies are only measurable at high relative speeds and not in daily life.

In the last of the five publications, Einstein described a consequence of his Theory of Relativity and showed that energy and mass are equivalent, as formally captured in the famous equation E = mc2.

In celebration of the 100th anniversary of those breakthrough papers, in 2005, the Einstein House was renovated for the first time in 26 years, thanks to the support of sponsors and partners. Together with an exhibition space on the third level, it aims to share information and engage visitors emotionally: How did Einstein live, and in which environment were his most important papers created?

The entrance has been renovated as well as the stairway, which welcomes the visitors with an illustration of the Milky Way. The old spiral staircase to the second floor has been left in its original state; one can very well imagine how Einstein walked up and down these stairs daily. The living conditions of Einstein and his wife Mileva with their son Hans Albert are shown more accurately in the apartment on the second floor with furniture from that time, as well as pictures and texts presented with the help of modern exhibition systems.

The apartment is open to the public. From the central train station, you can get to Kramgasse No. 49 if you take the direction of “Bärengraben,” walking under the right-hand arcade.

More details on Einstein's time in Bern
In a rather short time (from March to September 1905) Einstein shook up the then-current fundamental understanding of physics and opened up far reaching scientific perspectives with 5 papers on 3 different topics of physics. 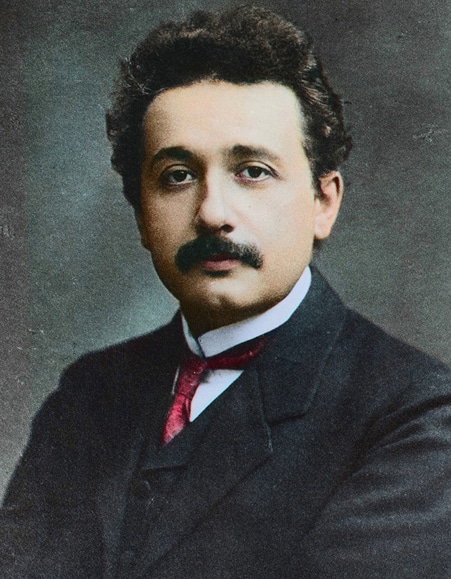 In celebration of the 100th anniversary of those breakthrough papers, in 2005 the Einstein House was renovated for the first time in 26 years. 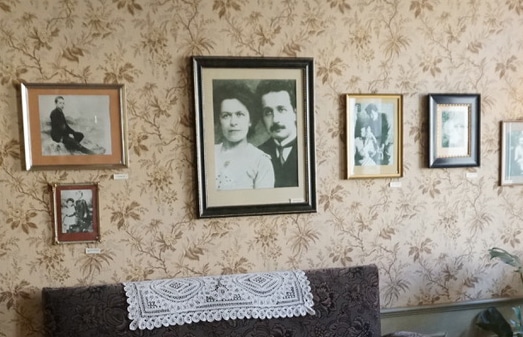 In October 2021, in the process of filming SEARCHING, I visited the house where Einstein lived from 1903 to 1905, on 49 Kramgasse Street in Bern, Switzerland. It was during 1905, working in near isolation, that he published his revolutionary theory of time and space, called special relativity. The young man was 26 years old at the time.

Although I wrote about Einstein and the city of Bern in great detail in my short novel Einstein’s Dreams (1993), I had never been there, much less to Einstein’s actual house. To write the book, I studied street maps of the old city of Bern, learned the location of such landmarks as the giant fountain and the clock tower, but I had never actually visited in person. I had wanted not to hamper my creative imagination with reality. When I was finished with the first draft of the manuscript, I sent it to some people who lived in Bern to correct any obvious geographical mistakes, such as the misplacement of small streets or the angle of viewing the Swiss Alps from certain cafes.

So it was a strange and moving experience to actually go to Bern. I had an odd sensation that I had been there before. The streets, the smells, the real clock tower, and Einstein’s house itself. The apartment where he lived with his wife Mileva and young son Hans Albert is on the second floor of a stone building, with many apartments and windows, each leading to a small balcony overlooking the street. You have to climb a steep and winding wooden stairway to get up to Einstein’s apartment. The sitting room, where I imagine Einstein worked with his pencil and paper, has a parquet floor, an oval table in the middle of the room, a wood chest on one wall, and a grandfather clock. It’s a small room. Today there are lots of museum-like photographs of Einstein on the wall, almost certainly not there in 1905.

Einstein is probably the most important physicist who has ever lived, aside from Isaac Newton. Every physics student learns his theories of relativity, gravity, his theory of light particles called photons, his work on “Brownian motion” and the size of atoms. Every physics student also learns something of his life. He was a loner. He was not such a good father and husband. But he was a scientific genius. I learned all of these things as a graduate student in physics. But after I wrote my little book Einstein’s Dreams, and later an essay about him for the New York Review of Books, I felt a deeper connection to him. I had tried to imagine him. I had tried to inhabit him, at least as much as another human being ever can. I had tried to understand his loneliness.

When I walked around the space where he lived and worked, I felt his ghost. Undoubtedly, some of the air that he breathed was still there in the room. Some of the molecules of his hand were still on the oval table. I placed my own hand on the table. I like to imagine that he could see me there, more than 65 years since he died, only a brief jump in time. Perhaps he could. As Einstein once wrote to the family of a recently deceased friend, “the distinction between past, present and future is only a stubbornly persistent illusion.”

"Some of the molecules of his hand were still on the oval table. I placed my own hand on the table. I like to imagine that he could see me there, more than 65 years since he died, only a brief jump in time. Perhaps he could." 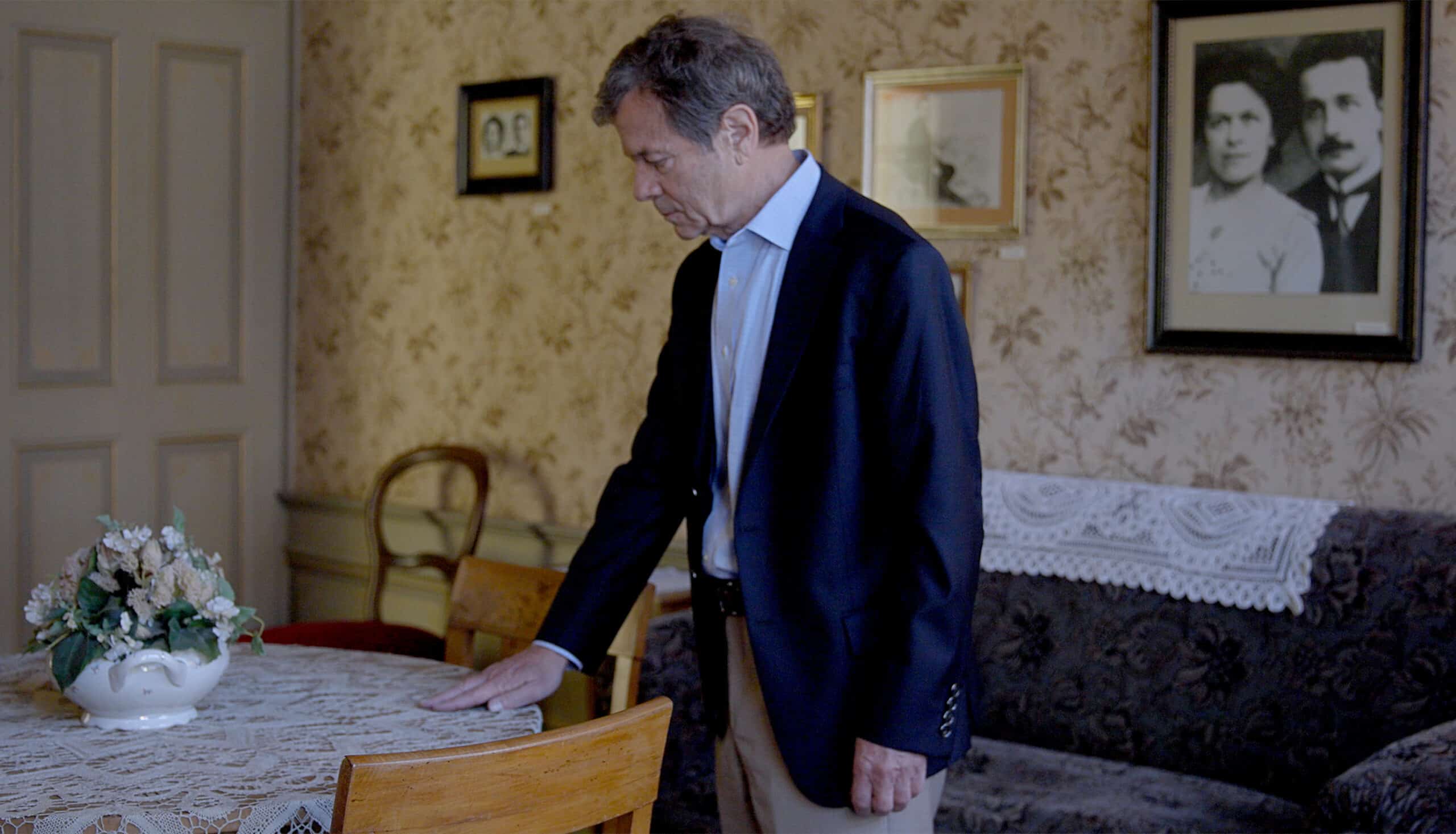